The Rebel Regiment placed first in its division, sweeping the Outstanding Music Performance, Outstanding Visual Performance and Outstanding General Effect captions at the conclusion of Preliminary performances at the Bands of America Regional competition at Wake Forest University in Winston-Salem, North Carolina, on October 14, 2017.  In all, twenty-seven high school marching bands, hailing from Virginia, North Carolina, South Carolina, Tennessee and Georgia, competed in the regional competition.  The Preliminary performance earned the Rebel Regiment a spot in Finals competition and each of the 245 members of the band a coveted Bands of America medal.

In Finals performance at the competition, the Rebel Regiment came in third out of the ten finalists in a down-to-the-wire finish, with only six-tenths of a point separating it from the first-place band, Fort Mill High School.  The Rebel Regiment performed its 2017 program “Lightning In A Bottle” to a packed audience and nationally-credentialed adjudication panel at Wake Forest University’s BB&T Field.  The band’s program includes selections from Bach’s Toccata and Fugue, Mozart’s Symphony, No. 25, Sia’s “Chandelier” and “The Electro Suite” by Hans Zimmer.

The Rebel Regiment would like to express its appreciation to Music For All/Bands of America for hosting the Winston-Salem competition.  It would also like to congratulate all the bands who competed, especially the first-place band, Fort Mill High School. 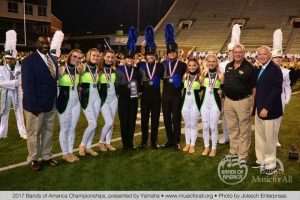