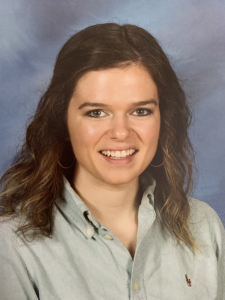 Welcome to our newest Band Director Allison Schweickert. She will be teaching six classes at our intermediate and middle schools during the school day. She will also be working with both marching bands and percussion ensemble at James F. Byrnes HS. We are thrilled that she will be part of our District Five Team!

A native of Columbia, SC, Allison Schweickert graduated from the University of South
Carolina in 2015 with a degree in Music Education and a Percussion Performance certificate.
During her time at the University of South Carolina, she performed each year with the wind
ensemble which included a China tour and performances at the American Bandmasters
Association Convention and the College Band Directors National Association Conference. She
also performed with the Percussion Ensemble at the Percussive Arts Society International
Convention in 2012 and was a member of the Palmetto Bands and the Carolina Band Drumline for four years. In 2014, Ms. Schweickert received the Cantey Award for Excellence and was
inducted into Pi Kappa Lambda, a national music honor society.
Ms. Schweickert also holds a master’s degree in Percussion Performance from the
University of Wisconsin. While in Wisconsin, she was the teaching assistant for the drumline of
the University of Wisconsin marching band. She also spent three summers with the Sound of
Sun Prairie High School Marching band where her last two were spent as the percussion caption
head.
Since graduation, Ms. Schweickert has worked in the Aiken County Public School system
for four years and is completing her third year as Band Director at Aiken Intermediate School
where she has consistently grown the band program. While in Aiken, Ms. Schweickert has
served as Adjunct Professor of Percussion at the University of South Carolina Aiken for the
previous five years. She recently completed a master’s degree in Education Administration
from the University of South Carolina.
Ms. Schweickert has been in the drumline of the Macy’s Great American Marching Band
and has marched twice in the Macy’s Thanksgiving Day Parade. She also performs regularly
with the Aiken Symphony and is excited to continue performing professionally in the upstate.
Ms. Schweickert is a member of the South Carolina Band Director’s Association and the
National Association for Music Education. When not teaching or performing, Ms. Schweickert
enjoys her kitten and two dogs, fishing, and teaching Pure Barre and Bodypump fitness classes.

Band Reminders May 9-14
Scroll to top